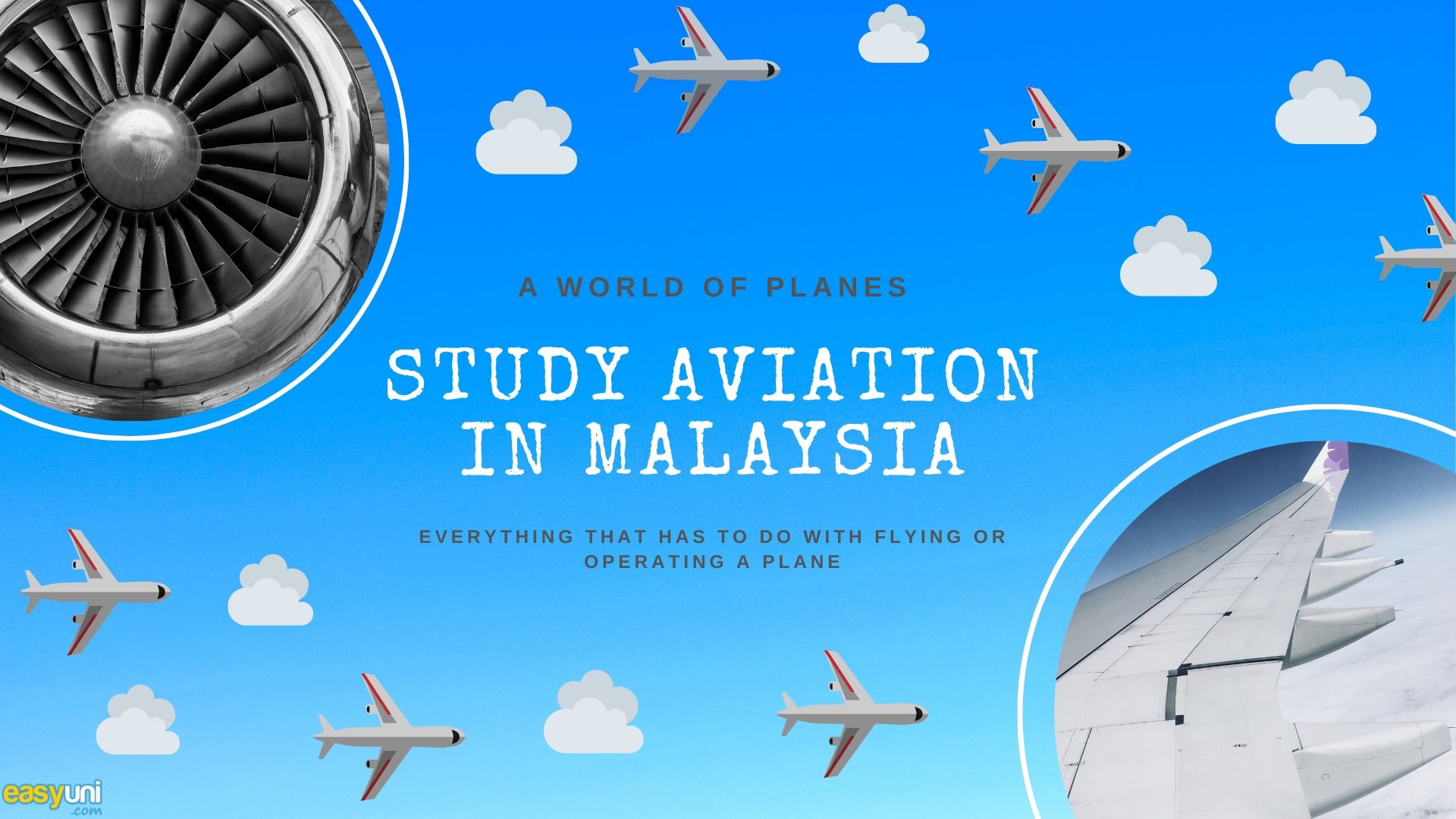 Aviation, also known as air transport, describes activities and industries related to flying or operating a plane. The operation of an aircraft can be categorised as civil aviation and military aviation.

Flights and aircraft in civil aviation are used for personal and business purposes, such as transporting goods or passengers, rather than for military purposes. Civil aviation includes two major categories, which are scheduled for air transport and general aviation. All scheduled air transport is commercial and for business purpose while general aviation can be either commercial or private, which is used for personal purpose.

The use of military aircraft and other flying machines in military aviation is for the purposes of conducting or enabling aerial warfare. In Malaysia, The Royal Malaysian Air Force (“Tentera Udara Diraja Malaysia”/TUDM) is the Army Aviation branch of the Malaysian Army. TUDM serves to defend and protect our nation from threats by taking control of the airspace, involving operations like an offensive airstrike, defensive counter-air and defensive suppressive. TUDM is also responsible for air combat rescues.

How do I become a pilot?

To fly an aircraft, an individual must possess a pilot license. Let's learn more about each of them.

PPL is an entry level course that equips cadets with the basic skills to pilot a single piston-engine aircraft with confidence.

ATPL is a complementary course for cadets with an existing CPL.

AFI is a course designed for trained pilots to become qualified flying instructors.

What are the skills needed to become a pilot?

The PPL examination consists of 6 examinations on knowledge needed to become a pilot. To get a PPL, one must pass these examinations with a pass mark of 70 percent or greater:

Where can I study Aviation Programmes in Malaysia?

Aviation is not a course as common as business, finance or engineering in Malaysia. However, there are many institutions in Malaysia where you can study aviation. These are some universities and flying academies you should check out: 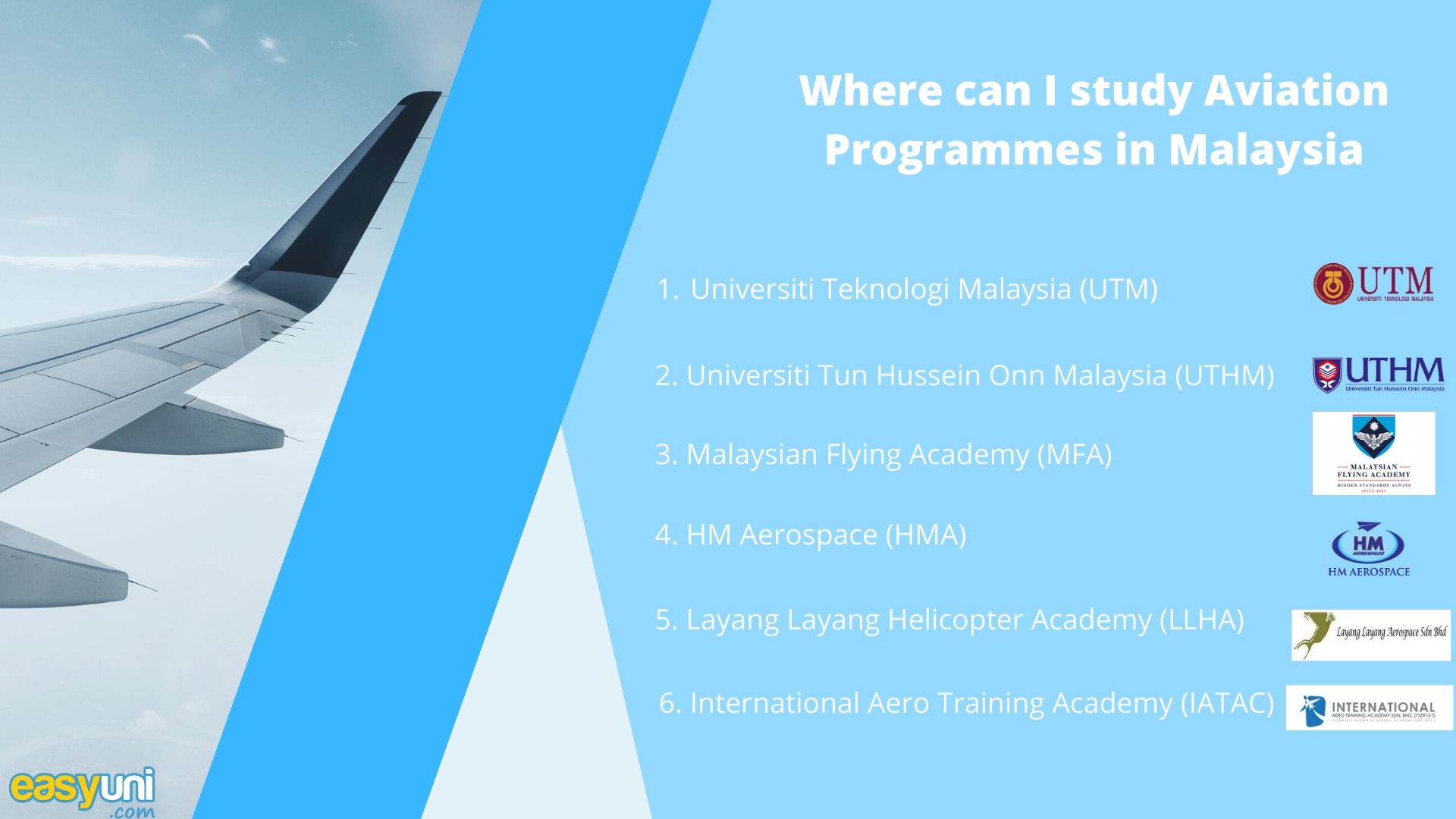 As a renowned public research university in Malaysia, UTM is well-known for its engineering courses. The Aeronautical Engineering programme is a specialisation of Mechanical Engineering. The course covers aerodynamics, aircraft structure, flight dynamics and control, propulsion and aircraft design.

The course includes a 12-week industrial placement during the semester break. This will make sure that the graduates of this programme are exposed to the industrial needs and experience and achieving the requirement to graduate in this field.

UTHM is one of the few public universities in Malaysia that offers an aviation bachelor’s degree. The programme concentrates on the aeronautical engineering technology to provide the substantial knowledge and skills for future engineers in the aviation field. The university offers two aviation courses:

Upon completion, students will be equipped with theoretical and practical knowledge in aviation to obtain an Airline Transport Pilot License (ATPL) or Aircraft Maintenance Engineer License (AMEL).

Visit their website for more information on the minimum intake requirements.

Due to the constantly changing nature of the industry, MFA continues to engage with airlines and industry specialists to introduce improvements in the syllabus offered. The courses offered by MFA are accredited by the International Civil Aviation Organisation (ICAO) and the CAAM. The maximum number of cadets accepted into MFA per batch are 20 cadets in accordance to the strict requirements of the CAAM.

The MFA does not offer diploma or degree programmes. Instead, they offer courses that equip cadets to obtain:

HM Aerospace is a flight training academy under the Halim Mazmim Group and was selected by Malaysia Airlines (MAS) as one of its preferred training centre for its cadets. The training centre of HMA is located in Pulau Langkawi, situated right next to the Langkawi International Airport.

LLHA is one of the few flight training academies which is located in Sabah. The academy owns various training aircraft like Cessna 172 Skyhawk, Bell 206 and Eurocopter AS 355 to provide students with the best resources. LLHA is also continuously engaging with industry specialists and their courses are accredited by the CAAM. LLHA offers a complete training for Fixed Wing and Rotary Wing holding both ATPL license as well as PPL and CPL licenses.

IATAC is located in Melaka, which is ideal for flight training with its low lying terrain. To help their cadets pass the Theoretical Knowledge Exam conducted by the United Kingdom Civil Aviation Authority, IATAC provides the most up-to-date Computer Based Training (CBT) so that cadets have a better advantage to pass the exam and enjoy higher employment prospect. IATAC offers pilot training courses like CPL, Abridge Course and Flight Simulator Training.

Recruits who passed the selection will have to undergo a training for 6 months before they are assigned to a position as a member of The Royal Malaysian Air Force (TUDM) and will only have to pay RM 67.50 for group insurance for the first three months of training.

What are the career opportunities?

Aviation has wide career options and talents in aviation are highly in demand. There are many organisations in Malaysia which require aviation talents to supervise flying activities in Malaysia.

Commercial Pilot: A commercial pilot needs to have a CPL and ATPL to be a professional pilot who can be paid to fly.

Aeronautical Engineer: Aeronautical engineers work with aircraft. They are involved primarily in designing aircraft and propulsion systems. They also study the aerodynamic performance of an aircraft and construction materials.

Aircraft Maintenance Technician: An aircraft maintenance technician is responsible for the safety of the aircraft by diagnosing, replacing and repairing aircraft parts, mechanical problems and electrical problems.